May your trails be crooked, winding, lonesome, dangerous, leading to the most amazing view. May your rivers flow without end, meandering through pastoral valleys tinkling with bells, past temples and castles and poets’ towers into a dark primeval forest where tigers belch and monkey’s howl, through miasmal and mysterious swamps and down into a desert of red rock, blue mesas, domes and pinnacles and grottos of endless stone, and down again into a deep vast ancient unknown chasm where bars of sunlight blaze on profiled cliffs, where deer walk across the white sand beaches where storms come and go as lightening clangs upon the high crags, where something strange and more beautiful and more full of wonder than your deepest dreams waits for you---beyond that next turning of the canyon walls. ---Edward Abbey (thanks Trudy Hall)

In the Jungle; the Amazon Headwaters 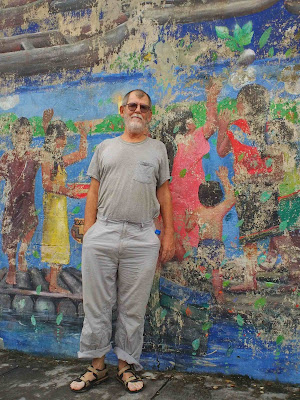 First I want to put down some half-baked thoughts about this 13-year-old boy, Negrito, who impressed me so, and why I don’t know a lot of kids in the US like him.  Negrito stepped in for another older boy who was assisting our guide and running the boat motor that kept flooding.  Negrito was super at-ease with everything he did from walking along the skinny gunwales carrying a heavy motor with a 10 foot extension for the propeller, to sighting wildlife and whistling their tunes, to working that fickle motor without a glitch and with the power to start it on the first pull each time.  He followed us in the pitch dark with a machete, deferred questions to the head guide and took initiative to help me see something with my untrained eyes.  He played soccer barefoot in the slippery mud and fetched the ball in the piranha-infested water.  I watched how the children were and weren’t allowed to do things: littlest cross-eyed Gary was constantly roped in when he picked up a machete or started bothering the tourists, there was a 3-year-old who dipped and swung her canoe paddle as elegantly as did her mother, young teens jumped in the water throughout the day, one child in the shallows had a thin inner tube and his dad was teaching him to swim.  I couldn’t help translating this scene into what it would look like if it were in the US: boats would be made out of fiberglass or metal instead of local materials, we would be wearing floatation devices (we can’t say they are life preservers because of legal reasons), they would make sure we were wearing protective gear while fishing, fog the place with insecticides to keep the mosquitos from giving us diseases, no swimming because of the caiman and piranhas, and Negrito would be so protected that he wouldn’t be able to do many of the things he does. That said, here’s the trip into Iquitos:
January 28-29—Arriving to the chaos of taxi drivers wanting a fare outside the airport got us a ride into town via a motorcycle rickshaw, but we found out that the hostel Les booked was by the airport!  We decided town was better and were dropped at a nice cheap ($10 each a night each person, cool shower, but it's warm out) place called La Casona by the central square.

Feb 3-7—Between Les and I getting sick and better, we have been lying low in town.  I’ve been able to catch up on some email, plan a little for our near future, clean files to give my computer a little facelift and eat some nice meals.  I’ve found a place that makes avocado shakes that feel great going through.
One day we went to the notorious Belen market, where they say not to wear even your watch because it will disappear (sure enough the small, rolled up bill in my pocket disappeared, but not the map in the same pocket).  I wish I could’ve taken some photos (here are some from on line).  It was fascinating to see all the things for sale that I had never seen before: black fish with big sucker mouths, giant leaves to cook things in, tons of oils, spices and who-knows-what in little blown up plastic bags, clothing and shoes;
and I heard that you can get illegal animals and ayahuasca (the potion for the rituals that cleanses you and gives you visions and insights into your life) there.
We stood at the edge of the subdivision of Belen, a slum of buildings that float on balsa wood bases so that they rise and fall with the swelling of the river.
On the way, I stubbed my toe on a dead rat, vultures were taking apart something that looked like a dog, dogs pranced around proudly with hooves and fresh bones, touts were staring at us in a strange way, hoping that we would pay them to take us on a boat ride through Belen for 20 minutes.  Garbage covered the water and the mud under the buildings; I don’t know how deep it was.  I think about how the earth could handle our garbage when it was all organic and when humans were much fewer in numbers.

Back at the main square, waiting for the next rain, we bought postcards and Dragon Blood that was to help us with wounds and stomach issues.  Oh boy! 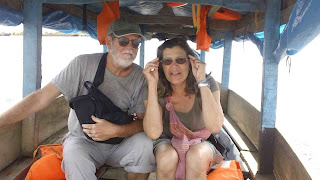 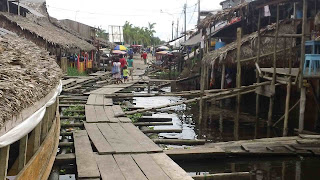 February 8—Our last day in Iquitos we went to the Pilpintuwasi Butterfly Farm an animal rescue site.  It was a happy surprise, as I was expecting something more flashy and touristy.  After a mototaxi ride to Padre Cocha Village and hiring a boat to take us up river, we began our 15-minute walk to the center.  The village street was a sidewalk big enough for a motorcycle taxi, and we asked someone if we were on the right track.  The man Eugene turned out to be a guide on the same river where we stayed in the jungle and a best friend of Falcon.  Small world!  We walked together and beat the drum that would bring someone from the center to greet us. 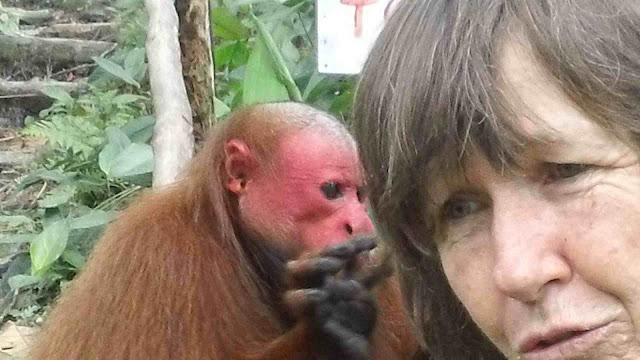 A woman named Gudrun from Austria who started the center about 15 years ago (lived here 40 years) became our tour guide.  She is very frustrated with the government for not giving her permissions to take in some animals to heal them or to release animals that are ready; she suspects they are arbitrary because of her residence status or because she won’t bribe them.  She reminds me of the modern day Dian Fossey: extremely passionate about keeping animals alive and well in their natural state, livid with those who are poaching and those who are creating a market for those poachers, willing to stick it out for the animals’ sake even when she doesn’t get cooperation from the government.  She even admitted that tourists get in the way of her work, just like Dian.  I learned and saw so much in just a little space!  Did you know that butterflies don’t weave a cocoon, but instead they go liquid inside their bodies, create the cocoon inside and pop off the skin when it’s ready? …that parasites lay eggs inside butterfly eggs and larvae?  …that in the wild only 1 of 100 eggs will become a butterfly?  …that the only way to tell a male is to squeeze the abdomen to see if the little claws for mating come out?  We saw butterflies that make an electric cracking sound when excited, others who will attack a butterfly on fruit and rip their wings, one who imitates the eyes of an owl, one who’s wings are transparent, and another who’s scales are not flat and so it gives bright blue iridescent flashes.  We saw crazy looking caterpillars: one I could only recognize as one and not a dead leaf after she touched it an it moved, another with vicious looking spikes, but when we felt them they were soft, another with crazy cubic patterns on it’s back, some that clustered together and many in process of becoming a butterfly.  One chrysalis turned out as shiny as gold paint on plastic.  Her job seems outrageously time-consuming: bring in eggs from the butterfly enclosure net, put in jars to disinfect and see if they produce good caterpillars, clean cages, bring in fresh food, collect cocoons and put on a board, collect hatched butterflies and release into net, and do it again.
That said, she also harbors several animals who were brought to her to rescue.  Some are animals that people think they are rescuing by buying them from the sellers at the market, but are really just creating a demand for poaching.  Some people bought and gave them food that kills them and didn’t know where to go with them.  Some come injured.
These include a jaguar, ocelot, a variety of birds (Les loved to hear imitated human laughs and, “hola,” come out of their beaks), a jungle raccoon of sorts, turtles, an anteater, two-toed sloth, something that looked like a muskrat/guinea pig/hedgehog, squirrel, saki and pygmy marmoset (she got these as babies and two could cling easily to her thumb) monkeys in cages and a raft of red faced Uacari monkeys in the trees who would come down and preen her, hang onto her and love her up.  They may be endangered soon.

Gudrun is faced with difficult questions about release, human contact, animals not getting along, keeping the caged ones engaged, how to make enough money to keep things afloat and many more.  She takes volunteers!